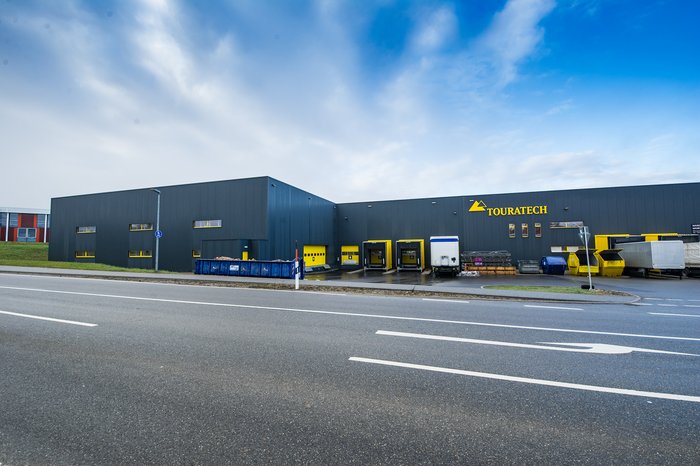 The Happich GmbH continues to grow and opened its new logistics center on the Touratech GmbH site in Niedereschach in the Black Forest in summer 2020.

After the completion of the third building of the Touratech logistics center, the Happich Group is not only looking back on a successful construction project, but also on a successful move from the previous warehouse in the Czech Republic and is thus repositioning itself for the future.

The investments in central logistics in Niedereschach are the largest in the company's history to date. After 15 successful years of logistics in cooperation with the Schenker company, Happich GmbH decided to pool its logistics expertise in the Black Forest at the headquarters of its sister company Touratech GmbH. A free plot of land and a direct connection to the existing Touratech warehouse offered a perfect setup for relocating of the Happich logistics to the Black Forest that had been operated in Bor in the Czech Republic

Placing the logistic in the hands of Touratech who has been running a warehouse ever since was the ideal decision to optimize performance. The investment in the location was not only confirmation of the company's location in Germany, but also confirmation of the efficient performance of the team in Niedereschach. The groundbreaking ceremony took place in August 2019, the first relocations to the high-bay warehouse took place in June 2020 and the entire logistics relocated during the summer holidays.

Modern warehouse technology and SAP-supported IT infrastructure ensure optimal processes and procedures in this new building. On a total of more than 3000 square meters, over 3500 storage locations are served, over 1000 small parts storage locations are managed and various special products up to 6 meters in length are optimally stored in a special long goods store with over 70 storage locations. The 14 new employees move with the new electric order picking vehicles up to 8 meters high and operate the systems completely digitally and without paper. Four new ramps and one long goods ramp make the entire logistics center of Touratech GmbH an efficient overall logistics system with a total of 9 ramps that can serve well over 100 trucks per week at regular intervals.

"There is always room for improvement". This is the unified tenor of the manager Udo Fichtenau, who is responsible for Happich logistics. The person responsible for IT-SAP and at the same time project manager, Stefan Nitschke. "We have been working with our colleagues on optimizing processes since day one and are already feeling the improvements that are being made in day-to-day business." Marc Pelzer, managing director and owner of the Happich Group and Alberto Reinhart, managing director and CEO are positive after the successful move: “The team worked together extremely efficiently and got the new warehouse up and running as quickly as possible. The perfect cooperation between IT and logistics played a central role here. Logistics is a core task of a system supplier and the know-how of the Touratech logistics center in wholesale and end-customer business has been of great benefit to us here. But the competence of both companies in the OEM business has also meant that we were able to serve all customers optimally and without interruption with practically no delivery delays. "